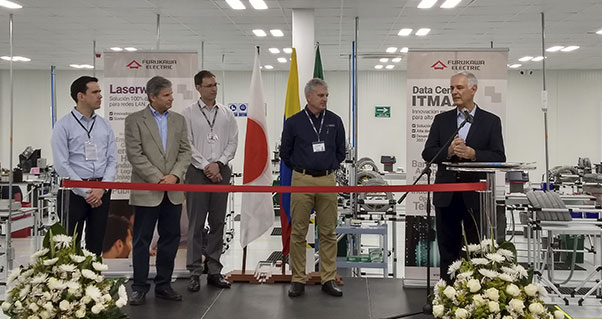 The presence of people willing to learn, the capacity and availability of high quality universities, the ease of procedures for export and import through free zones and the development of the region, are the variables that highlight the Japanese company Furukawa Electric to have chosen Valle del Cauca for the establishment and growth of its operation, with the accompaniment of Invest Pacific.

“We are, through this expansion, more present in the Andean market and through Colombia and the Palmira Free Trade Zone, we can supply our advanced technology products to the entire Andean market region and Central America,” he said.

Furukawa Electric is a Japanese multinational, with more than 130 years of history, focused on offering robust technological solutions to serve communication infrastructures worldwide. In Latin America, it has been present for 45 years, with manufacturing plants in Colombia, Brazil, and Argentina.

The Executive Director of Invest Pacific, Alejandro Ossa Cárdenas, explains that the dynamism and favorable conditions that these key players find in our region is contributing not only to boost the arrival of new investments, but also the growth of those already established, such as Furukawa.

“Furukawa arrived in Valle del Cauca in 2013, two years after it was installed it expanded its manufacturing plant and now in 2019, it inaugurated a second optical components production plant, from where it will serve the Mexican market. That means that optical fiber made by labor from Valle del Cauca is offering connectivity solutions to other parts of the region and the world,” said the Executive Director of Invest Pacific.

“Invest Pacific’s support to develop the industrial concepts that Furukawa designs in the region has been fundamental. Because Colombia is a country that has a history in commercial and agricultural supply that is growing, and with our friends of Invest Pacific we are being able to sensitize the parts of the Government and other actors of society about the importance of having local industries,” added Shaikhzadeh.

According to information from Furukawa Electric Latam, optical fiber represents an indispensable connectivity solution in the digitalization process, not only to support growing demands, but also to face the rapid technological evolution of networks and telecommunications.

There are already 107 investment projects in Valle del Cauca, which in the last eight years have been accompanied by Invest Pacific, generating more than 10,220 direct jobs, with investment flows that reach US$1 billion.

Newsletter 30 – Decathlon, the french multinational that captivates the hearts of Cali athletes

Newsletter 30 – Decathlon, the french multinational that captivates the hearts of Cali athletes