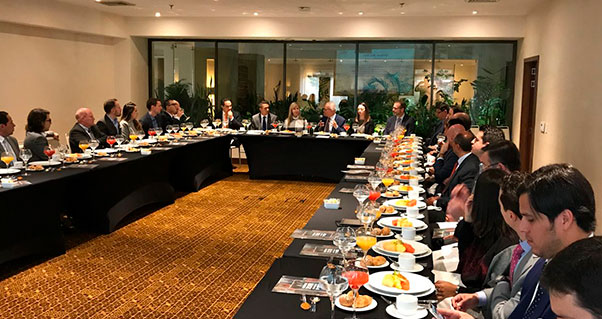 Today, Wednesday morning on March 7th Bogotá, Invest Pacific and the German Colombian Chamber of Commerce organized the first business breakfast. Representatives of German companies were invited to this venue who received firsthand information about the advantages that settling in Valle del Cauca and Cali offers to foreign companies.

This breakfast had the presence of 43 guests hosted by the Governor of Valle del Cauca, Dilian Francisca Toro, the German Ambassador, Mr. Michael Bock, the Secretary of Economic Development of the Mayor’s office, Mr. Deninson Mendoza, the Secretary of Development of the Mayor’s office, Mr. Julián González, Invest Pacific’s Executive Director, Mr. Alejandro Ossa and the representative of the German Colombian Chamber of Commerce Mrs. Carnina Batz, also executives of companies like Siemens, Bayer, Bosch, DHL, Boehringer Ingelheim among others.

After the welcome words from Valle del Cauca’s Governor and the Ambassador, who invited the German businesses to get acquainted to the region, and topics like: the perception of the region towards foreign companies, Cali as a driver of progress of the region, Valle del Cauca and its productive clusters, the value offer of the department and high impact projects in the region were touched upon.

This breakfast was an initiative that helped strengthen the bonds between Germany and Valle del Cauca for the articulation of investment projects. The German Ambassador Mr. Michael Bock stated, “This was a very important meeting and also a calling to awaken the interest of those who want to invest and already have. A good moment for development towards peace.”

The Ambassador also stated that German business owners left with a positive impression after receiving interesting and detailed information, apart from the opportunity of interacting with representatives of the different entities that promote foreign investment in the department.

Carina Batz, Project Director of the German Colombian Chamber of Industry and Commerce thinks that these type of spaces are necessary and it’s an important effort to attract German companies to the region.

“It was an excellent event were we felt objectives were reached. The German Colombian Chamber of Commerce worked jointly with the Governor’s office of Valle del Cauca and Cali’s City Hall to attract German businesses through the value offer, interacting with all entities related to economic development and star-ups”, according to Alejandro Ossa, Invest Pacific’s Executive Director.

These type of social acts are done in order to strengthen business relationships with strategic countries that have the potential to increase foreign investment and expand their operations in our country.