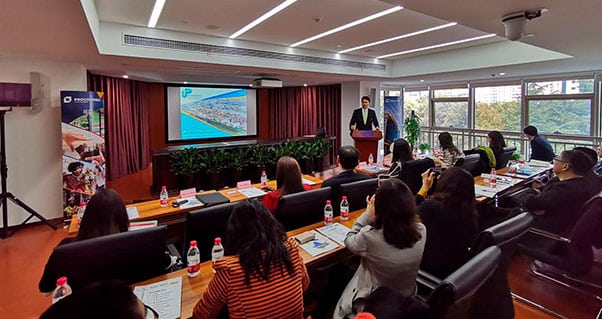 On a tour through China and Japan, Invest Pacific along with other regional investment promotion agencies, Mincit, and ProColombia present the export, tourism and investment potential of Colombia and its regions.

From 21 to 30 March, in a mission from ProColombia, the Ministry of Commerce, Industry and Tourism, Invest Pacific and ProBarranquilla visit Japan and China to present the competitive advantages that Colombia offers as a destination for tourism, business, and investment, as well as its status as an export platform to third markets in the region.

“In this tour to Asia, we will meet with firms interested in investing in agricultural and infrastructure projects, as well as with cooperation entities that seek to support the development of commercial and investment agendas of the Asian market in Colombia. We will have meetings with entrepreneurs from the renewable energy sector, orange economy and E-commerce, among others. We see a great opportunity to attract new investments with a transfer of high technology, best practices and potential to generate employment,” said Flavia Santoro, president of ProColombia.

The first stop was Tokyo, with meetings of the World Economic Forum whose objective was to review the progress of the Center for the Fourth Industrial Revolution of the WEF (C4IR) in Japan and review possible alliances in innovation with the new WEF center in Medellin.

In the same city, a meeting was held with the directors of the Inter-American Development Bank (IDB) of Asia to review the support plan for Colombia’s promotional activities in that region and with a view to the Board of Governors of the IDB that will take place in 2020, in Barranquilla.

“From the National Government, we are working to enhance the attraction of investment. Tools such as the Financing Law and the National Development Plan put entrepreneurship at the center of priorities and open the doors to the arrival of more high-impact foreign direct investment. Sectors such as infrastructure, tourism, creative industries, software, and IT and agro-industry have the potential for the development of new projects that contribute to the generation of employment, competitiveness and the promotion of exports,” said José Manuel Restrepo, Minister of Commerce, Industry and Tourism.

The agenda included meetings with companies such as Mitsubishi, to discuss the Keidanren meeting, a meeting between Japanese and Colombian businessmen to be held in June this year in Bogotá. Meetings were also held with Japanese conglomerates and banks in which business opportunities, reforms, and incentives promoted by the National Government were presented, such as the Financing Law and the Free Zone regime, which promote and facilitate the arrival of new investment.

In partnership with the IDB and Jetro, a Japanese counterpart to ProColombia, a seminar was held to promote Colombia, to publicize its exportable offer and as an investment destination for Japanese entrepreneurs with potential interest in establishing or expanding operations in the country.

The tour continued through Shanghai and Chengdu in China, where an investment promotion seminar was held for Chinese businessmen and meetings were held with importers of consumer products and services such as the Greenland Group, and e-commerce companies.

At the end of the meeting, a visit was made to the Chengdu Information Technology Industry Park, where the Colombian delegation will learn about the progress of this segment in the Chinese market.

Opportunities identified by ProColombia for Asian entrepreneurs in Colombia

Colombia has a wide range of possibilities to receive Asian investments in creative industries and orange economy. Segments such as cinema, scenic and audiovisual arts, software and IT production, design, publishing sector, culture, video games, fashion, jewelry, handicrafts are some of those with potential to capitalize and project themselves in the local and international market.

Among the most attractive sectors for investment in markets such as Japan and China, the infrastructure segment stands out in the development of road projects, trunk roads, and secondary and tertiary roads.

The need to increase Colombia’s electricity generating capacity with clean energy sources is driving numerous projects focused on renewable energy. Companies from both China and Japan, which have extensive international experience, have much to offer to participate in its realization.

Colombia offers opportunities in sectors such as engineering services, equipment for mining and the oil industry, capital goods and agri-food and consumer products.

Invest Pacific highlights investment achievements in the region during 2018

Invest Pacific highlights investment achievements in the region during 2018