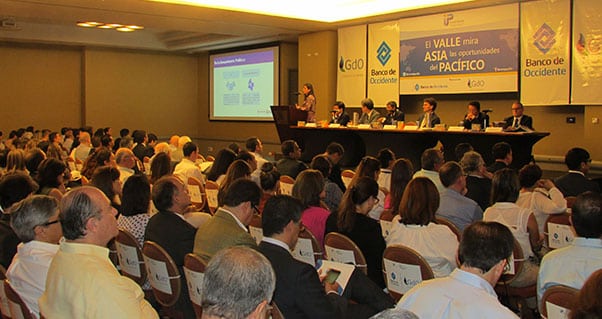 (Cali, March 31st, 2016) A forum with Asian countries’ representatives in Colombia and the group’s visit to the Buenaventura port, are part of the activities of the Invest Pacific Assembly to take place next Wednesday April 6th, in the city of Cali.

The Assembly’s sixth edition will take place at the Marriott Hotel between eight and ten in the morning and during the meeting the 2015 Management Report will be introduced, highlighting the entry of 13 business projects to the city, with investments near the 17 million dollars and the generation of 420 direct formal employments.  Also the plans for 2016 will be discussed during the meeting.

Upon arising of the General Assembly, Invest Pacific will carry out the forum “El Valle mira ASIA las oportunidades del Pacífico” (Valle looking toward the Pacific’s opportunities –Asia-) with the involvement of Representatives from China, Korea, India, Japan as well as the Director of Asia, Africa and Oceania from the Colombian Chancellery, Sandra Salamanca, and the Director of the Thinking Center about Asia Pacific, Mauricio De Miranda.  The forum will take place that very Wednesday April 6th, at the Marriott Hotel between 9:30 in the morning and 12 (noon).

This event has important guests among which there are business people from the region, representatives from the local and departmental governments, guild leaders, stockholders, the academic sector and the media.

“This forum is part of the Agency’s strategy to position Valle del Cauca as the business hub of Colombia with the Pacific Rim, aiming to attract direct foreign investment, to generate new formal employment and to contribute to the Region’s social and economic development” said Alejandro Ossa Cardenas, Executive Director of Invest Pacific.

After the forum, between three and five in the afternoon, at the Chamber of Commerce office; the City Hall of Cali will present the Asian representatives with the city’s most important projects in the search of possible alliances with the eastern countries.

Previous to the Assembly and the forum, that is on Tuesday April 5th, the Asian Representatives will go to Buenaventura to visit the Port Society of Buenaventura and the Container Terminal, and will have a meeting with the city Mayor and other authorities, as well as a conversation with the Comite Intergremial y Empresarial –Business and Guild Committee- of the city.

“Given Valle del Cauca’s strategic position, its competitive advantages, potentials and opportunities, it is bound to take the leadership for the Country’s entry into the Asia – Pacific market” Concluded the Executive Director of Invest Pacific.