“If the regions thrive, the country thrives as well”: Invest Pacific Director during Confecámaras 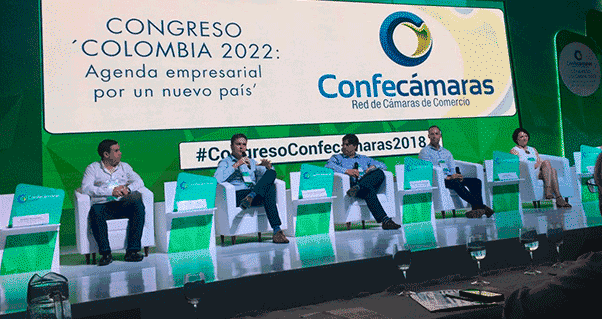 With the purpose to converse and share about the actions and initiatives that have been consolidated throughout the regions of Colombia, tending to promote the country’s development and creating favorable conditions to attract further investments, thus contributing to improving life quality while enhancing business networks, Invest Pacific participated of the Annual Confecamaras Conference “Colombia 2022: Business Agenda for a New Country” held in the city of Cartagena.

During this scenario, Invest Pacific Executive Director, highlighted the importance of business and social development, as having brought the establishment of multinationals in Valle del Cauca “These investments have created more than eight thousand jobs and are improving the region’s productive apparatus, as multinationals aren’t only settling on traditional territories such as Cali or Yumbo, but also, are starting to go to other municipalities, that were left behind in terms of investment in the past, they were out of the radar!”

One of the most representative examples shared during the panel was the Peruvian company Agrogenesis, which is established in the city of Trujillo (Valle del Cauca), that provides employment to single mothers.  It is important to remember that villagers in that area endured ill treatment during the many years of the internal armed conflict, hence the foreign investment in this area translating into progress and life quality improvement to its inhabitants.

Conversely, during this panel, it was also shared that thanks to Invest Pacific’s actions, during the last seven years, the department has welcomed the establishment and re-investment of more than 80 companies, with investments near US$825 million and the creation of about 8.000 employment positions.  Similarly, it is expected that by 2018, the Agency achieves its target to establish 21 projects in Valle, with an investment of US$160 million and the creation of some 1.800 jobs for the region.

During his intervention the Agency’s Executive Director, also noted: “The country’s economic development starts from national and foreign entrepreneurship of its regions; if the regions thrive, the country thrives as well. We mustn’t forget that Colombia is a country of regions, and that it is because of them that business people who come over find a business ecosystem the encourages them to invest, for they see a strong business network within the country, its departments and cities”.

The Annual Confecamaras Conference took place between the 13th and 14th of September, being attended by more than 1.200 business people, the 57 Chambers of Commerce of the country, the National Government and the media.