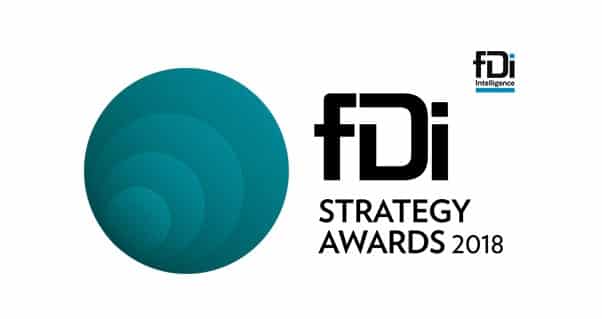 Invest Pacific, the Investment Promotion Agency for the Colombian Pacific was granted the “fDi Strategy Award 2018” of Financial Times, given its ‘after care’ strategy, used to strengthen alliances with foreign capital companies settled in the region, providing them with support and assistance through their different expansion and growth processes.

The entity is the only investment promotion agency in Colombia to hold that category this year, along with other eight agencies from Latin America and Europe.  The fDi Strategy Awards 2018 were organized by fDi Intelligence, one of the world’s most important research specialized centers in direct foreign investment, which is also part of the reputable British journal: Financial Times.

“These are very positive news, since one of our goals is for foreign and domestic investment companies choosing our city/region to settle down, to keep growing and achieving their purpose while contributing to local progress and development.  As Investment Promotion Agency, we also seek to bring commercial contact closer among these companies, the region’s corporate tissue and the different public entities.  Likewise, we intend to provide them with the necessary tools to meet excellent results within the region” stated Alejandro Ossa Cardenas -Invest Pacific Executive Director.

According to fDi Intelligence, the classifying of participant regions was done based on information received by the different agencies between October 2017 and October 2018, which were analyzed and evaluated by a judging panel. fDi Strategy awards 2018 include several categories with the participation of more than 112 regions in the world.

More than 96 domestic and foreign investment projects with an amount of more than USD$920 million, have arrived or re-invested in the city / region during the last eight years, creating more than 9.700 direct employments.  So far in 2018, 20 companies have come to the territory to settle, not only in the department’s capital – Cali- but also in neighboring municipalities all over the region, such as Bolivar, Roldanillo, Trujillo, among others, thus showing the robust competitive advantages Valle del Cauca has to offer.

It is important to highlight that in August this year; Valle del Cauca was regarded as one of the 10 regions with the best investment attraction strategy in Latin America and Colombia, by another ranking lead by fDi Intelligence known as ‘Latin America States of the Future 2018/19’.