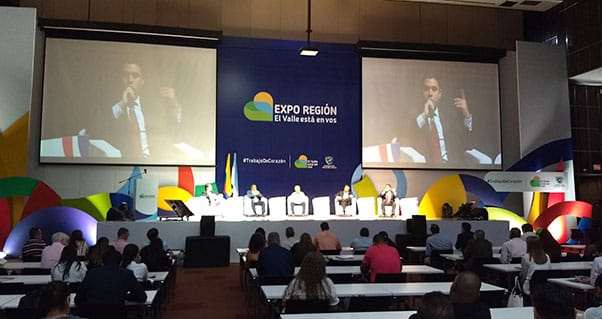 Four foreign businessmen shared the competitive advantages they have found in the region, in the framework of Expo Region 2019 organized by the Governorate of Valle del Cauca.

Valle del Cauca is one of the ten regions with the best investment attraction strategy in Latin America and Colombia, as highlighted in 2018 by the Financial Times, in its FDI Intelligence ranking.

In order to discuss the value proposition of Valle del Cauca, which has favored the presence of recognized foreign companies that come to the region to generate employment opportunities, development and sophistication of the productive apparatus, the panel ‘Internationalization, the Valle del Cauca bet’ was held this Thursday, March 14, within the framework of Expo Región, an event promoted by the Governorate of Valle del Cauca.

The panel, which was moderated by Alejandro Ossa, Executive Director of Invest Pacific, gave voice to four foreign investors from companies from Uruguay, Peru, Holland, and China, who decided to set up their operations in the region with the support of Invest Pacific – the Investment Promotion Agency in the Colombian Pacific. They all shared their experience and highlighted the reasons that led them to invest in the region.

Among the reasons highlighted by these investors are geostrategic location, solid infrastructure and connectivity, qualified human talent, competitive costs, quality of life and the offer of services that the region has, as well as the management and support of institutions, both public and private sector, in accompanying its establishment and growth.

Jaime Miller, General Manager of Zonamerica, the first and only free trade zone of services in Colombia – investment of Uruguayan capital – highlighted Cali’s very competitive costs, the abundant human talent and the wide cultural offer that the capital of Valle del Cauca has: “We found qualified people, and from all the cities that we visited in Colombia, that caught our attention. In addition, the institutional support, from the Government, the Mayor’s Office, Invest Pacific, Procolombia, all asking you what you need and this gave us a lot of confidence, because this is a long-term business, it is a park of 38 hectares and we are going to build 18 buildings, so we are going to be here for a long time.

For his part, Andres Mosquera, Operations Manager of Express Luck, a television manufacturer of Chinese origin, said: “We reached a free zone because of its proximity to the port of Buenaventura. I also highlight the warmth of its people and the work of government entities has been fundamental in our project, which gives much peace of mind to a foreigner, especially the Chinese, who are very respectful of the rules and authorities and feel supported by the regional government has been fundamental and key.

In turn, Emmanuel Landa, manager of Viveros Genesis Peru, a company producing Hass avocado, citrus and grape seedlings, installed in Trujillo, highlighted the benefits that make the region the country’s main agricultural pantry. “For us in Peru, the phenomenon of the child is a serious problem, because when all investments in agriculture arrive, they stop. So, we look for another location, and we decide in Colombia. And in Valle del Cauca we saw a wonderful climate, it is located in a very strategic area and has great potential for export. Colombia has a great advantage and that is that it can fill the shelves of supermarkets around the world twelve months of the year,” he said.

Precisely because of this Peruvian company’s presence in the region, Invest Pacific was recognized last year as an agency committed to attracting investment that contributes to sustainable development goals by the United Nations Conference on Trade and Development (UNCTAD).

Finally, Julián Pérez, Manager of Florius Flowers, a Dutch company producing export-type flowers, established in El Dovio and Roldanillo, said: “I started a four-month journey, 3,150 kilometers traveled, more than seven departments visited and from afar Valle del Cauca, from the day I arrived I already knew that this was it. We chose the Valley because of the ease of access, the quality of the people, the land and the support of the institutions. Each hectare of cultivated flower generates 10 jobs in the crop and four in the post-harvest period. If we manage to develop the 100 hectares, we will have 1,400 (jobs).

Invest Pacific is an entity, created eight years ago, which is responsible for promoting investment in the city-region in a cohesive exercise with the public and private sector. In these eight years of continuous work, Invest Pacific has promoted 97 investment projects in Valle del Cauca with an investment amount that exceeds US$926 million, generating almost ten thousand jobs.

“Of these 97 projects, only in the last three years (between 2016 and 2018) 53 projects were installed in the region, representing more than US$421 million and contributing to the creation of 5,522 new jobs. This shows the favorable investment climate that investors are finding in the territory,” said Alejandro Ossa Cardenas, Executive Director of Invest Pacific, moderator of the panel.

These investments of the last three years have come from countries such as Holland, Peru, Uruguay, China and many more. They have been installed in different municipalities and cities of the region, not only in Cali, Jamundí, Yumbo, and Palmira, where the investment has traditionally arrived but also in Candelaria, Buenaventura, Buga, Roldanillo, El Dovio, Bolívar, Yotoco, and Trujillo.

“Valle del Cauca is a department of cities that has very good productivity conditions, a strong business network, highly qualified labor and a wide range of services,” added the Executive Director of Invest Pacific.