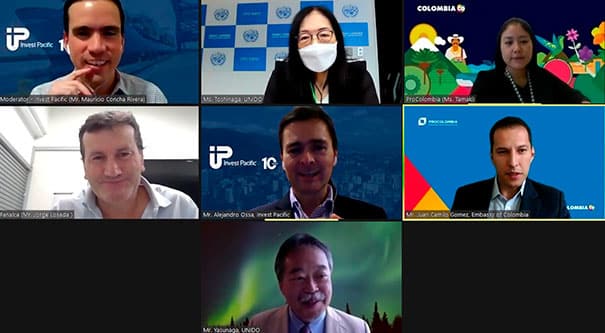 • Ten Asian companies operate today in Valle del Cauca, these companies have set their sights on this Colombian region thanks to its strategic location and for being a gateway to the countries of the Pacific Basin.

More than one hundred Japanese businessmen, interested in more information about the investment opportunities they can find in Valle del Cauca, connected on September 9 to the Business Conference ‘Valle del Cauca, logistics and export platform for Asian companies’, a virtual space where the deep mark and commercial tradition that has existed for almost a century between Japan and our region was highlighted.

During this event, organized by Invest Pacific and the United Nations Organization for Industrial Development – UNIDO, with the support of Procolombia, the Government of Valle del Cauca and the Mayor’s Office of Palmira, it was explained why Valle del Cauca is a Privileged region for Japanese companies to develop their operations.

Governor of Valle del Cauca, Clara Luz Roldán, highlighted in her installation message: “Our Valle del Cauca has all the suitable conditions for the development of service operations, manufacturing, logistics and agribusiness, as well as infrastructure projects. We are one of the most cost-efficient regions for logistics operations in Colombia. In addition, Valle del Cauca is the third most relevant economic region in Colombia, contributing 10% of the national GDP, and has the most diversified export basket in the country. Furthermore, 15% of the national industry and 23% of the agro-industry are concentrated in this territory ”.

Valle del Cauca is the best productive and export platform in Latinamerica since it has the maritime port of Buenaventura, a leader in Colombia’s foreign trade operations. It has seven free trade zones, responsible for 40% of all exports from the country’s Free Zones, two of which are located in Palmira, one of the main cities in the region, which has been an ideal destination for the establishment of multinationals .

“Today we have more than 200 companies with foreign capital, which have come from different countries in America, Europe and Asia, and which have been able to take advantage of the opportunities offered by our region in terms of competitiveness, capacity and availability of human talent, solid business network and geographic location. Becoming a destination for foreign investment translates into more social and economic development for our beloved department”, stated Alejandro Ossa, Executive Director of Invest Pacific.

Valle del Cauca, as a hub of internationalization

One of them is Electrojaponesa, a Valle del Cauca company founded in 1970 by a Japanese immigrant, who found immense opportunities in this Colombian land. Today the company is a pioneer and leader in the commercialization of household appliances.

On the other hand, Fanalca is a company from Valle del Cauca, recognized in the auto and moto parts sector, with a large tradition of doing business with well-known Japanese brands, and which exports to markets such as the United States. “For many years we’ve had strong relationships with Japan. We are an exclusive distributor, assembler and manufacturer of Honda motorcycles; we have a factory that assembles approximately one hundred thousand units of Honda motorcycles per year and we have to comply with a rule in Colombia that mandates that 20% of the motorcycle parts have to be manufactured in our region,” said Jorge Lozada, Vice President of operations of Fanalca.

He also added that: “Companies are understanding that they can not depend on Chinese manufacturing, they need to realize that there are other opportunities of manufacturing in different parts of the world such as Valle del Cauca”.

Invest Pacific is the Investment Promotion Agency in Valle del Cauca, a non-profit entity with more than ten years of service in the region, supporting foreign capital companies in the development of their operations in the different municipalities of the Department. It works in synergy with the public and private sectors of the region, as well as the academia, in promoting foreign investment as an engine for social and economic development.