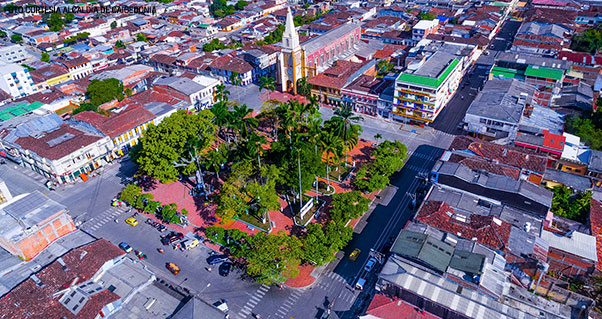 In order to keep articulating efforts among the public and private sector, that enable the promotion of agricultural vocation and all the competitive advantages for growth and development of the many municipalities of the region, especially in such areas most affected by the armed conflict, the Investment Promotion Agency for the Colombian Pacific – Invest Pacific- partook in a week long workshop led by Caicedonia’s Institutionality.

Invest Pacific’s strategic visit to this city allowed to open a space for conversation about Caicedonia’s productive initiatives in agroindustry and tourism that make the place attractive to establish both national as foreign investment. This area of Valle del Cauca, for example, has a vast agricultural vocation that makes it a diverse pantry for banana, plantain, coffee, berries, hass avocado, among other products thus opening wide market opportunities.

Alejandro Ossa – Invest Pacific Executive Director- explained that Caicedonia has the tools to attract high important investment, being one of the 15 areas of the region known as Zomac* – Zones Most Affected by the Armed Conflict- (*by its acronym in Spanish) and by having tax benefits and exemptions on industry, commerce and property taxation that encourages companies to settle in town.

“During these seven years of work we’ve been able to bring investment of more than 800 million dollars, with more than 80 companies of national and foreign capital that have extended throughout the region.  We want to keep up working to attain new investment for the different municipalities of the Department, that is why we are doing it this time in with by the hand of Caicedonia.  It was very interesting to see both the City Hall and the Council more than willing to understand the particular needs of investors.  I perceive many opportunities for this municipality and we find a great willingness from the public, academic and private sectors to support these efforts” stated Invest Pacific Executive Director.

Caicedonia’s Mayor Claudia Marcela Gonzalez also remarked: “Economic development and growth are some of the main priorities we have in our administration, therefore, we’ve decided to find support on Invest Pacific, to unite public and private efforts into promoting investment on our city from the different sectors, them being agricultural, industrial, touristic, among others.  We remain expectant to strategize thus providing progress to the municipality, harnessing on the additional benefits the tax reform gives the city”.

Currently, ranking companies in Valle are not only located in Cali and Palmira, but in many other neighboring cities like Buga, Yotoco, Trujillo and Caicedonia, thus showing the Department doesn’t have richness only in its capital.  The investors interest to work with different areas from all corners of the Department translates in efforts being done by public and private entities to broaden the region’s business network.

“We’ve noticed that in some areas of the Department such as Roldanillo and Yotoco much more investment has arrived, which is why business people are turning their eyes over to these non-traditional municipalities.  To us is quite meaningful to work with Invest Pacific, as it is very important to identify the value and potentials Caicedonia has, making investors come and contribute to the region, not only economically, but also to benefit the community” stated Deputy Carlos Alberto Orozco.

This workshop led by Caicedonia’s mayor Claudia Marcela Gonzalez and Valle del Cauca’s Deputy Carlos Alberto Orozco, had the participation of different Offices, the Municipal Council, and other actors that are key to strengthen nexus to draw foreign investment.  The all reaffirmed their commitment to work along with Invest Pacific in identifying the city’s value propositions, in order to enhance this area’s productivity in the region, to boost knowledge and the life quality of its people.

To keep in mind