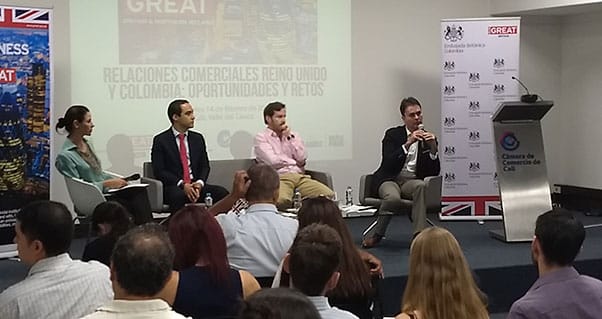 Within the framework of the forum “United Kingdom and Colombia trade relationship: opportunities and challenges”, the British ambassador Petter Tibber visited Cali and showed his interest for diversifying trade relations with the city and the region.

According to what ambassador Petter Tibber manifested, Cali is one of the most economically active cities in Colombia, with an important international tradition that needs to be improved. Thanks to the sophisticated value offer that the region counts with different countries from around the world, among them the UK, want to boost their businesses.

During the panel “British investment in Cali: risks and opportunities”, the ambassador stated that what Valle del Cauca is doing in the meantime is reviewing the sectors and cities in which resources will be invested in, the main purpose of this is to reduce poverty levels and increase the region’s competitiveness with the support of the Latin American Development Bank, the Science, Technology and Innovation Commission and the Governor’s office of Valle del Cauca.

This forum also counted with the participation of Julián González Juri, Secretary of Economic Development, said that the city’s economic bets are generating tools for existing and new companies to grow, since the city counts with a program called Business Development System, designed to find opportunities and develop the objective market.

Lucia Rojas, the Deputy Director of UK Colombia Trade made reference to the value offer Cali and Valle del Cauca have, which was promoted through an event last November organized by Invest Pacific (Familiarization Trip).

In the panel “Commercial and economic perspectives”, British companies operating in Colombia participated by sharing their experience in the city and highlighted the loyal and committed professional human talent found in the region.

“The effect that the presence of large British companies has had isn’t only related to job creation, but there has also been a multiplying effect in terms of the dynamics and standards of the other companies in the region”, according to our Director Alejandro Ossa.

This panel showcased the points of view the United Kingdom has in a commitment with Colombia as allies that will foster the strengthening of business in both parties, where Valle del Cauca plays an important role since it has been included to receive new investment opportunities.