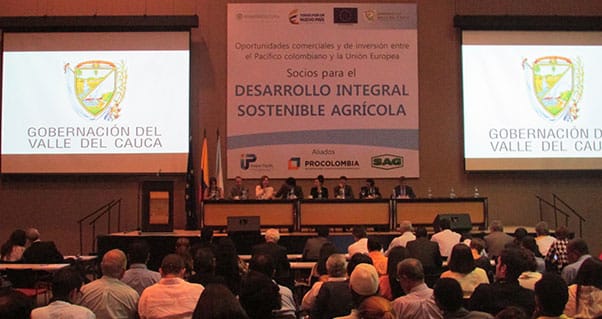 (Cali, February 9th, 2016) “In agriculture there’s Colombian peace and the future of post-conflict” These words of Jean-Pierre De Meerleer, Commerce Official of the European Union (EU) Delegation, could be regarded as the core message of the encounter between delegates of the European Economic Community and leaders of the Colombian pacific region, where commercial and investment opportunities were discussed with the old continent in terms of agriculture.

To Phil Hogan, Agricultural and Rural Development Commissioner of the European Union, the region “Has an enormous potential if it has stability and peace” Then, making a comparison with Ireland, his homeland, the high Representative said: “Amidst the crisis, agriculture has been an opportunity for total recovery” y highlighted in particular that Valle del Cauca is a very fertile territory with a large potential.

The Director of Pro Colombia, Beatrice Lopez, appealed to the maximization of the Commercial agreement with the EU signed in 2013 saying: “We have to look beyond the natural markets like Ecuador or the neighboring countries.  In Europe there is a big consumer potential with more than 500 million people waiting for our products”

The Executive Director of the Agency for Investment Promotion Invest Pacific, Alejandro Ossa, stood out the department’s competitive advantages.  He said that Valle has the best Multimodal Communications infrastructure of the Country in road ways, ports, airports and connectivity.  He pointed at great infrastructure developments of the region, currently under construction such as the freeway to Buenaventura, the Sweet Water port, the expansion of the Alfonso Bonilla Aragon International Airport and the Mulalo – Loboguerrero Road soon to be built.  “This infrastructure facilitates and its important when making business with other countries” said Invest Pacific Director.

“In the last decade, the Country’s financial development was leveraged by the mining and energy sector.  This sector is handing the baton to agricultural and industrial ones and with these two fields is Valle del Cauca’s time!” Concluded Alejandro Ossa.

The meeting gathered authorities and representatives from the Colombian pacific departments.  Valle del Cauca Governor Dilian Francisca Toro, addressed the European Delegation to single out the competitive advantages of the department by saying that “We have the best road system of the Country, the most important port of the Country, very good connectivity and a great agricultural development”.

All the while Cauca’s Governor, Oscar Rodrigo Campo, saw the agreement and the support of the EU as an opportunity to strengthen productive chains with in order to close gaps and improve farmers’ income.  “We need to maximize productivity to ease the pressure from the department of Cauca” He emphasized.

On his part, Marco Fidel Marines, Agricultural Secretary and Narino Governor’s Representative, promoted his department to the European delegates as an ecological territory with three goals: Green growth, sustainable development and peace with social equality.   “It is in the fields of Colombia where true development lies!” He said

Representatives from different agricultural organizations from countries such as the Netherlands, Italy and Spain said to the leaders and business people from the Colombian Pacific region that there’s a great potential for organic products in Europe, ergo their invitation to cultivate environmentally friendly foods, which are healthier and have a self- sustainable system.

The encounter which gathered important inputs from countries such as Belgium, Denmark, Portugal and Sweden, was organized by the European Union, the National Government through the Ministry of Agriculture and the Valle Governor’s Office with the support of Invest Pacific, Pro Colombia and SAG.