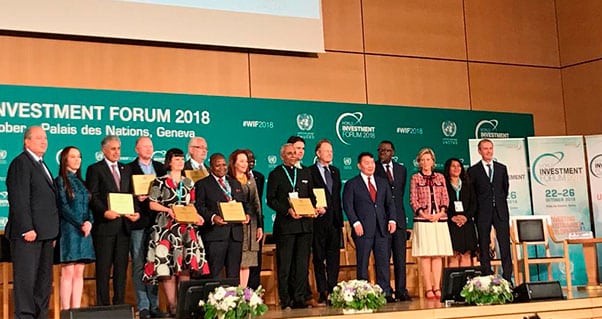 Given its social contribution promoting the coming of companies that believe in sustainable development, the generation of employment opportunities, and life quality improvement of vulnerable communities, Invest Pacific, – Investment Promotion Agency for the Colombian Pacific- was recognized this October 22nd by the UNCTAD – United Nations Conference on Trade and Development-, as an agency committed to attracting investment that contributes to Sustainable Development Goals.

Invest Pacific Executive Director, Alejandro Ossa Cardenas, received the award from Her Imperial and Royal Highness Princess Astrid of Belgium, and it was the only Colombian Investment Promotion Agency to receive such recognition during the 2018 World Investment Forum that takes place in Geneva, Switzerland from October 22nd to 26th. Other investment agencies in the world were also recognized as promoting sustainable development commitments, such as Invest India, InvestSA South Africa, EDB Bahrain (in Asia), among others.

The agency is known for identifying and attracting companies that contribute to sustainable development of regions most affected by the armed conflict, such is the case of a Peruvian company settled in the area. The project, ‘Viveros Genesis Colombia’ has promoted sustainable development and job creation, particularly for single mothers, triggering new economic alternatives to work in the fields. Stated the ceremony organizers, after the handing over of the award by Her Imperial and Royal Highness Princess Astrid of Belgium.

Viveros Genesis Colombia, original from Peru, settled its production facilities with seedlings of hass avocado, citrus, and grapes in the village of Huasano, from the municipality of Trujillo (Valle del Cauca), formerly one of the most affected by violence. From there, the company aims to create one hundred formal jobs, especially for single mothers.

“We are very happy and pleased with this worldwide recognition, and being able to contribute to this work by the hand of Valle del Cauca Governorship, Santiago de Cali City Hall and Chamber of Commerce, and many more partnerships of the region’s public and private sectors, that enable us to promote investment and sustainable development projects. This is the result of coordinated effort seeking to empower competitive advantages our city and department have, adding to the welfare, prosperity and development of our people and our country”, noted Invest Pacific’s Executive Director from Switzerland.

In his turn, and after learning about this recognition, Emmanuel Landa, Viveros Genesis Peru, Directing Manager said: “We are very grateful with Invest Pacific, for having helped us so much in making it to this Colombian region. You are extraordinary professionals. Here in Peru we welcomed this news with much joy, and I want to express mi gratitude and congratulations to the Invest Pacific team, for their concern about their country and its people, this is the result of all the work they’ve been doing”.

It is worth to mention that investment projects are causing an impact in different areas of Valle del Cauca, attracted by human talent and a service networks the region has to offer, being the only city department, with more than 100.000 people in eight of its municipalities. Hence, besides traditional investments found in Cali, Buenaventura, Palmira, Yumbo and Jamundi, others investors are also choosing places like Buga, Roldanillo, El Dovio, Yotoco and Trujillo; this latter home to Viveros Genesis.

Viveros Genesis is one of the biggest in Peru, a leader in production and trading of vegetables’ seeds and seedlings. Founded in 2001, launched its expansion in 2016 choosing Valle del Cauca, Colombia for it. In 2017, the nursery began its operation in the region, introducing hass avocado, grapes and citric seedlings. They’ve planned to import blueberries and other exotic species in a short term, and have generated 25 jobs with one hundred more forecasted.

Its commitment to farmers’ economic and social development, the development of agricultural exporting companies and providers, generate an impact throughout its productive chain, helping mitigate poverty.  Furthermore, it promotes employment to Trujillo’s vulnerable population – an epicenter of many years of violence- thus providing opportunities and reducing inequalities.